Whew! It seems like years since I was last on-line and connected to anything. It's scary how days and nights slip past so quickly - the only way to create the illusion of slowing Time down is to live in the moment - not an easy thing to do.

It wasn't my intention to stay away for five months but, in February, because of an error of judgement on my part, Tumbili, one of the two remaining Fur People in my care, seriously injured herself - I had no choice but to stay with her until she'd healed. I'm still too distraught to write about the incident.

I hope that you're all well and happy. Physically, I'm in good shape but I have been in turmoil for many months now. It seems that my life progresses in roughly 12-year cycles; at the end of each cycle things fall apart and then, gradually, fall back together again - right now I'm in a process of renewal and, despite recent setbacks, I feel wiser and more confident about who I am and the path I've chosen in life. I'm thankful to be alive to enjoy the wonders of Creation.

Recently I met an 84 year old farmer who I hadn't seen for awhile. He asked if I was retired. I replied that I'd banished the concept from my mind and that the day that I Croak I'll be "retired" - he just gave me a wry smile in return. I hope my words were not ignorantly arrogant and that they won't come back someday to bite me on the butt. 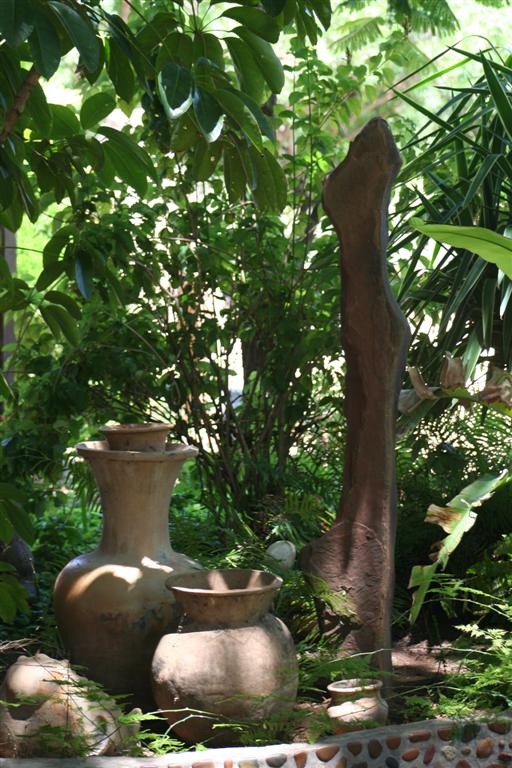 One of the first things I did in January was to erect three Rocks from the Bullsport area in the Fern garden. 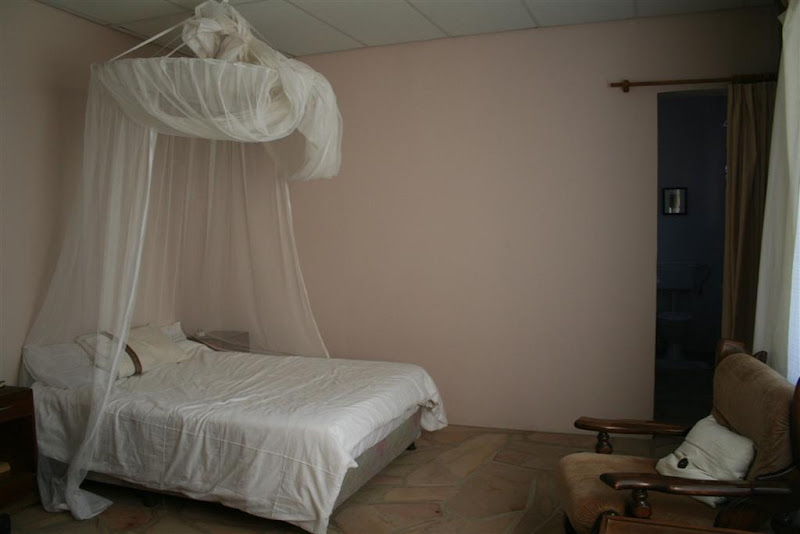 I started work on the Guest Room - 'Nadine's Room' as it's known because my daughter claimed it for herself many years ago. I painted it 'Morning Clarence' ... Nadine was not overly impressed with my choice, she calls it 'Pink' and prefers Yellows. 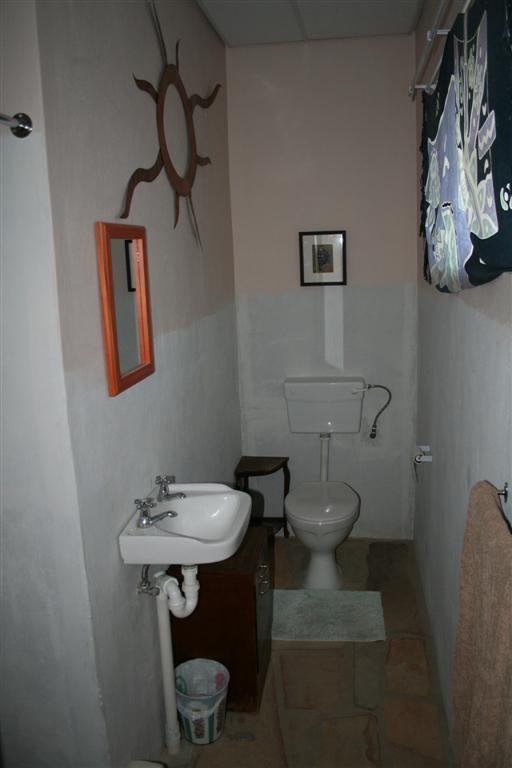 I laid the shower floor and the slate floor of the en suite bathroom to Nadine's room, and installed the basin and toilet. I only painted the top half of the wall 'pink' because it was my intention to tile the bottom half - Nadine suggested that I only tile the shower area and paint the rest of the wall ... I'm still thinking about it. 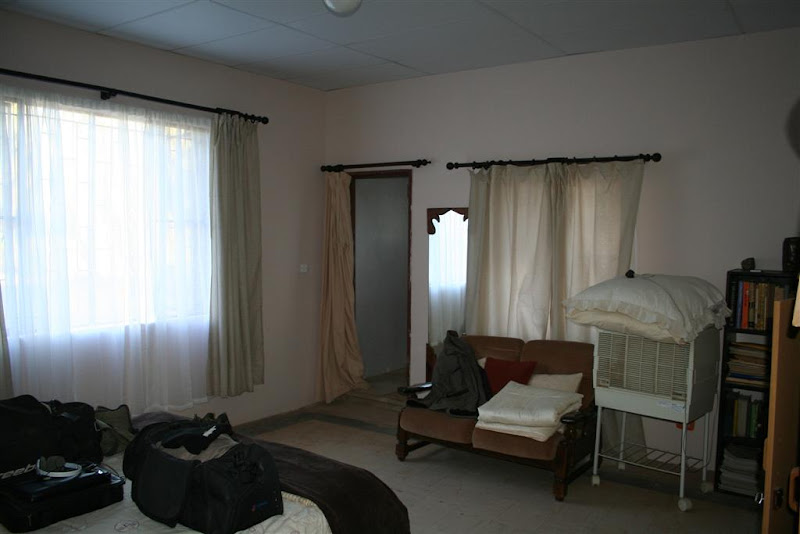 I had enough 'Morning Clarence' left over to paint the Main Bedroom - I like the colour, it's peaceful and pleasant on the eye - I've been told that 'pink' is the preferred colour in psychiatric institutions, I don't know if that's true ... :)

The door in the centre of the pic is the entrance to the en suite bathroom, which is also fully-functional now. 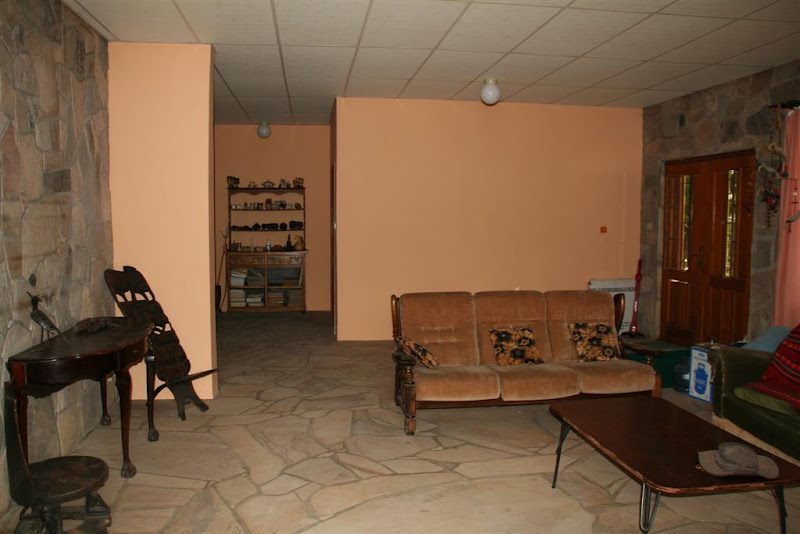 I chose the colour 'Foothills' for the lounge and Nadine did the painting (she calls it 'Orange' and refuses to commit herself to liking it, preferring only to say that it complements the Rock work) ... sigh! ... I was trying for a Sossusvlei Sand Dune effect but I must admit that it does seem a shade too dark, it appears much lighter in the pic. 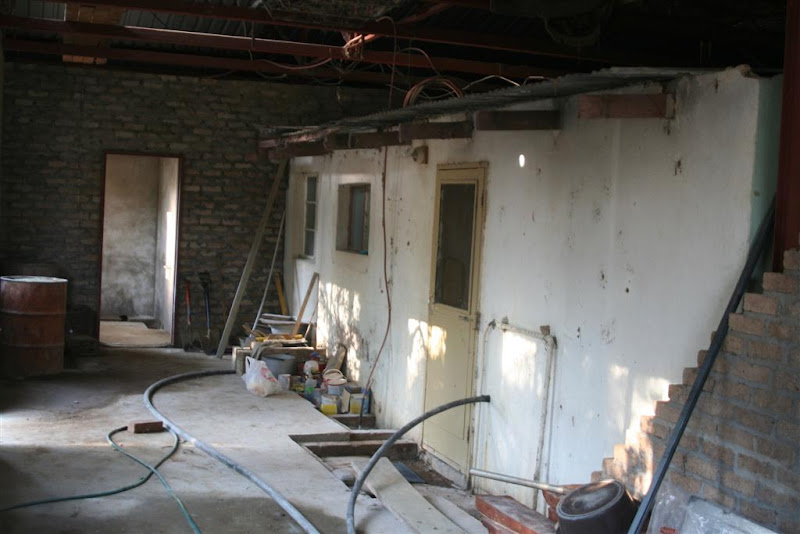 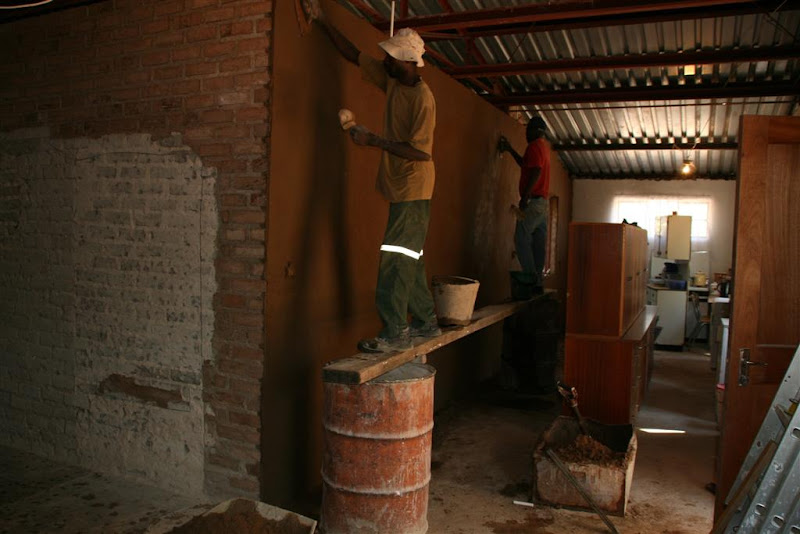 After rebuilding the walls and creating a passage and pantry I contracted two local builders, both named Lazarus, to plaster the walls, a task requiring skill and experience and which I could not do myself. 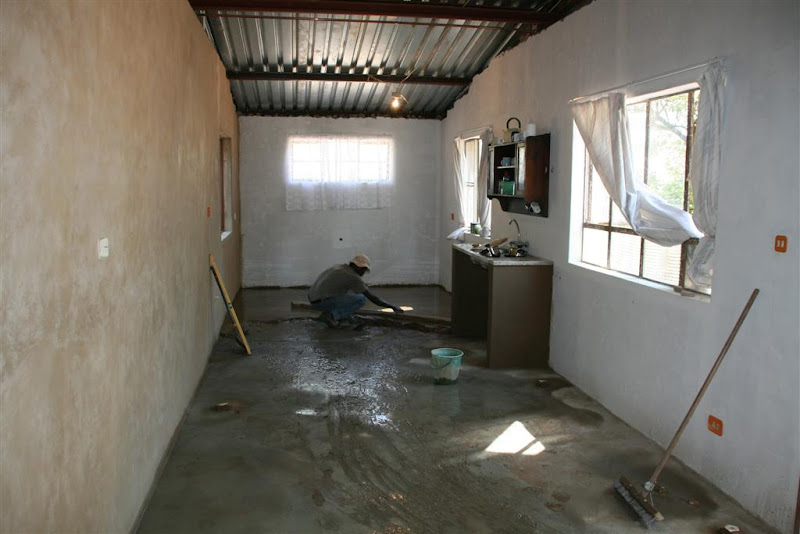 The two Lazaruses did such a good job of the plastering that I invited them back the next week to place a 40mm topping on the floor. 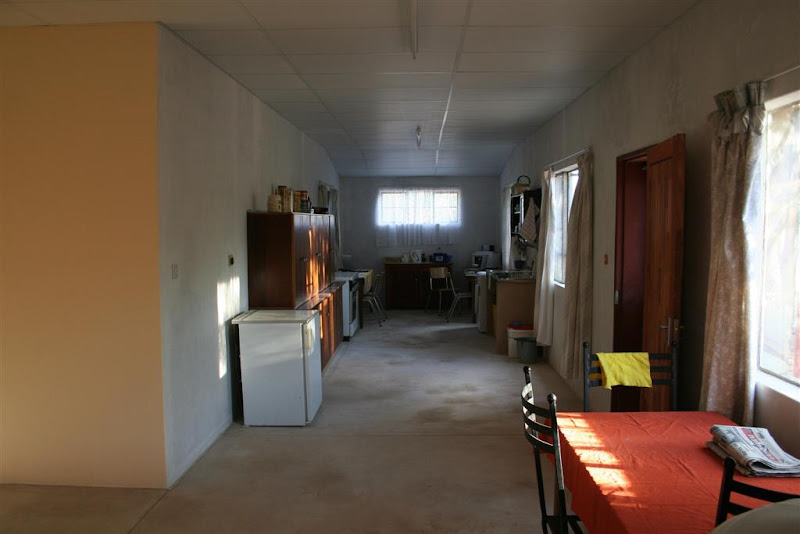 The almost-complete new Kitchen after I'd installed the ceiling - it must still be painted and a tile floor laid.

The new kitchen has five windows and is light and airy the whole day and has already become a favoured gathering spot - (as kitchens often are). 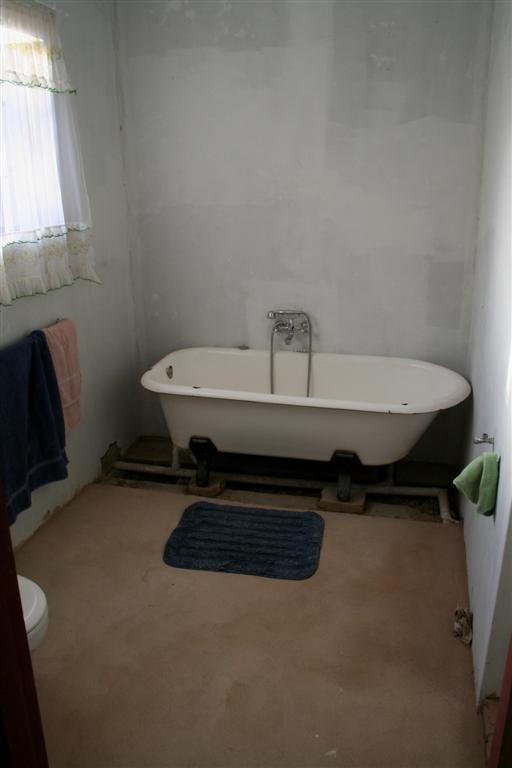 I decided not to buy a new plastic bath and to use this old one - it has a few dings in the enamel and the legs need fixing but it's big, great for wallowing in and can comfortably accommodate two people at the same time ... :)

The bath and toilet are functioning but I must still do the floors and install a wash basin. 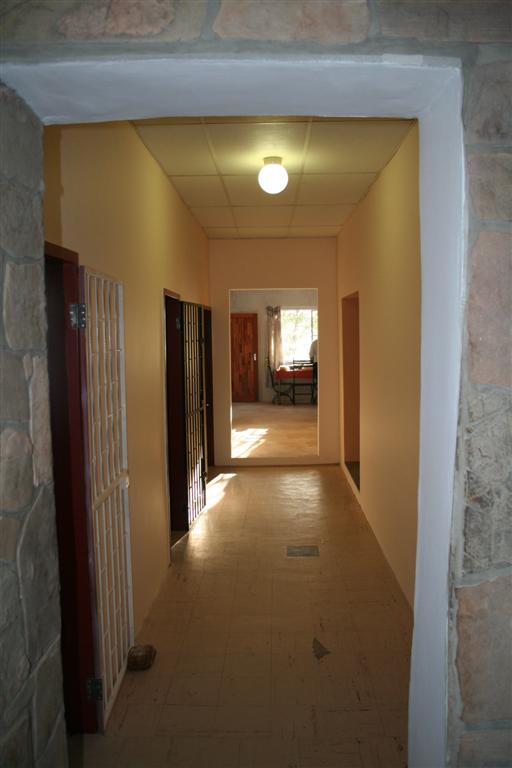 Nadine stayed with me for two months and did a lot of painting, including the passage through to the kitchen. The passage walls were in a bad state and she did a great job of patiently repairing and painting them 'Glow-worm', (her choice), a happy shade of yellow which lightens the inside of the house considerably.

Thanks for all the hard work Nadine, you're a Star - and it was great to spend some time with you again. 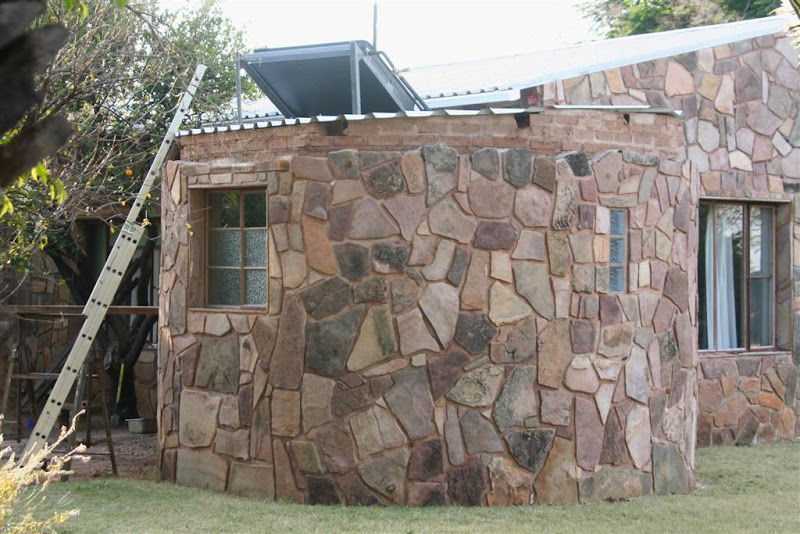 I haven't done any Rockwork on the outside of the house for quite awhile now and the top of the en suite bathroom still awaits a Crown - I've been agonizing for months about how to finish it off but can't form a clear picture in my mind - I decided that I need a starting point so I've lugged a long Bullsport rock onto the roof where it awaits installation when I feel inspired again.

I've worked hard these last five months, rising and going to bed with the Chickens - sometimes I was in a frenzy where I paid little attention to safety and was lucky to escape with only a few cuts and bruises.

I'm satisfied, even surprised, at the amount of change I made to the inside of the house. After twelve years of concentrating on the outside walls of the house, everything is coming together, all of a sudden it's more spacious and Light and feeling more like a Home.